Today has been all about shopping! There was no morning training so I got to sleep in which was needed after yesterday. Woke up feeling fresh and ready to go. We had the day entirely free and all I really needed to do was grab a few groceries so Sandra and I decided to walk into town together to do some shopping. I’m glad we did because by the end of the day we realised our time left here is filling up very fast. Once there we organised a time to be back at the dojo and went our separate ways. First things first, it was time for a coffee! After sitting down over a coffee, checking my budget, making a plan as to what I wanted to get etc, I got down to business! I had found a few gift shops and 100yen shops on my previous trip into town and knew of where to find a couple of others so first stop was a 100 yen shop in one of the big shopping centres where I bought a few gifts as well as a couple of practical items, then I went back down to the Shimatori which is like a mall, I found a sock shop and started messaging Charlotte about socks, we were sending messages back and forth and I was taking photo’s of socks to send to her until we decided on what she wanted.. I’m sure the shop assistants thought I was mad or rude or both but I ended up spending a fair bit there so hopefully they are ok with it! As I left the sock shop I saw a temporary stall across the mall which had some Samurai type outfits etc for sale so I thought this might be the place to get the gift I had in mind for James. It turned out they didn’t really have anything so I was walking away when the guy behind the counter gave me a flyer for their main store. In it I saw exactly what I had been looking for so I went back over to him and asked about it. It turned out he spoke very good english so he explained to me where the shop was and gave me a map, told me which tram to catch and which stop to hop off at, and then rang the store to tell them I was coming. He said it would be better if I could wait awhile and go after 1pm so I kept wandering down the Shimatori looking at other shops. Before I knew it I had gone all the way to the end and I figured looking at the map that I was halfway there so maybe I should just walk the rest of the way. I was trying to get my bearings to determine if I was where I thought I was so I asked a guy standing nearby for directions… turned out he didn’t speak Japanese (even though he looked Japanese) and he was actually a german tourist only in Kumamoto for a day! I decided to trust my instinct and the map the guy had given me and wandered off. I did find the shop although it was a bit further than I expected, bought the gift I was looking for, and decided this time I would catch the tram back to where I was. I was pretty sure I was on the right side of the tram track’s but just wanted to be sure so I decided to ask the lady sitting with her baby at the tram stop.. it turned out she was deaf and couldn’t help… I’m thinking the universe is telling me to have a bit more self belief because both times I didn’t really need help, I was just second guessing myself! Anyway, I caught the right tram, back in to the Shimatory, had some lunch and did a little bit more gift shopping before grabbing some groceries and heading back to the dojo.
I had only been back at the dojo for a few minutes when Sandra looked out the window and saw we had a visitor. Marc Waterfield Sensei is another Canadian who is now living in Kumamoto. It was great to catch up and have a chat with Marc Sensei and he invited us to join him for a little kids class on Saturday afternoon. It sounds like they will be like our little champions ages so I’m looking forward to some games and fun with them. The second half of the class is playing in the giant playground near the dojo! Who wouldn’t want to do that!!
This evenings class was a women’s class with Minowa Sensei. When Sensei arrived she invited us to go star gazing on Saturday night after the kids class. We also had a quick visit from Tanaka Sensei before class started. He has invited us to be part of a demonstration at a senior centre next Monday. Monday is a public holiday here celebrating the elderly.
The class started with Kihon’s as usual and then we broke up and Sensei Sandra worked on Kusanku with her partner and I worked on Tenshin with my partner for the second half. 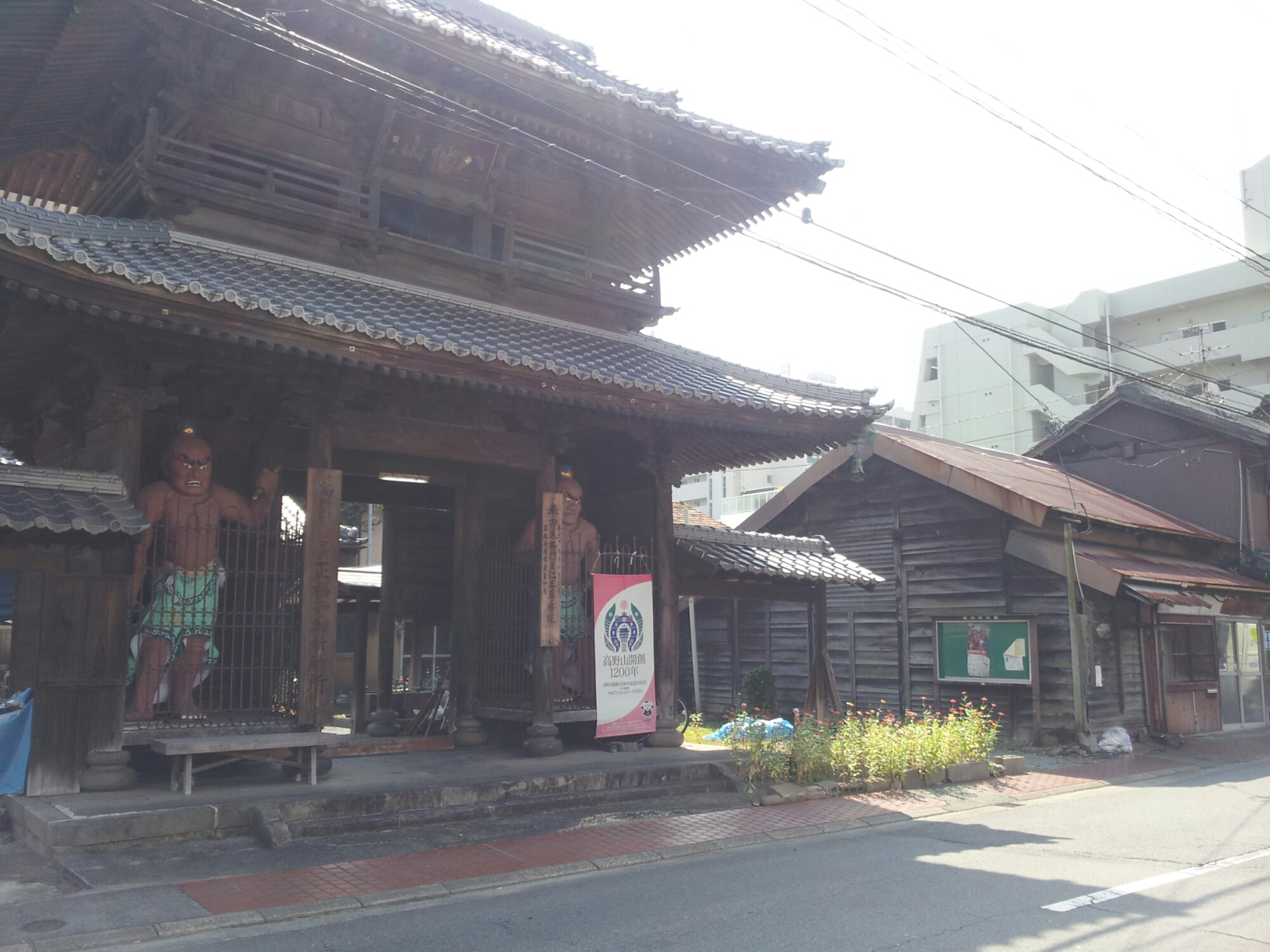 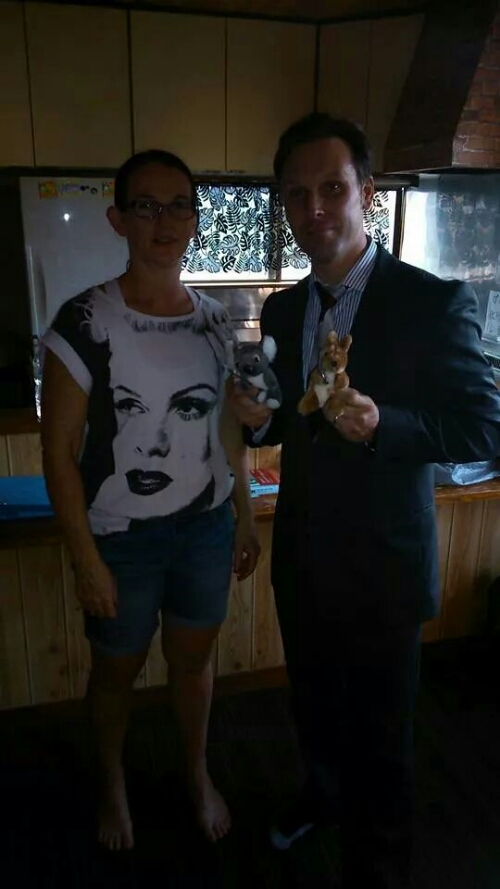 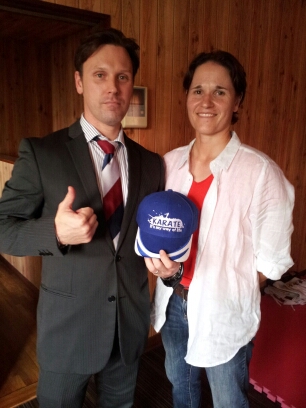 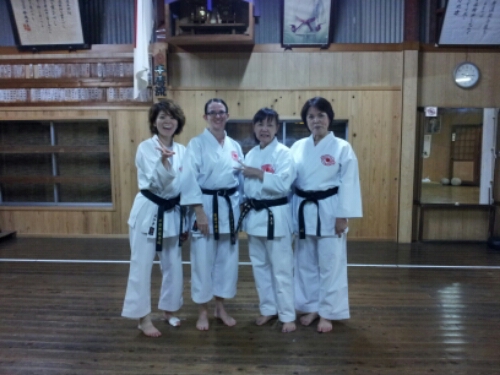 Me with the ladies from tonights class 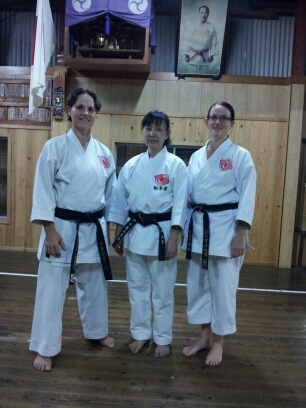 Sandra and I with Minowa Sensei