Today was a big day. For some reason I didn’t sleep very well at all Tuesday night and so it was a big day on very little sleep… gotta love those! We were up early for training with Soke Sensei. This morning was a little different from traditional morning training. We did some partner work focusing on shime and strength in our stance as we were stepping with resistance from our partner. I need to work alot on my breathing and shime I am finding. The woodne floors here are really slippery and while it makes suriashi really easy it also shows up the holes in my Shime and posture. My stances are still a bit all over the place as I adjust. We then did some rinten, rinten hanten, shiko dachi etc with the bo on our shoulders aiming to keep it flat as the body turns and also with the bo behind the hips aiming getting a fast spin the stop sharp without letting the bo wiggle back and forth. Next we did some speed kicking and full length of the dojo with kihon dosa San- I think the biggest thing for me here is just to do more of it, try to relax and get faster. Also from the evening class Todd Sensei gave me some feedback on breathing which will help this area of my training.
We finished morning training a few minutes early as Minowa Sensei was due to pick us up at 8.30am. A quick Souji, freshen up and get changed and we were off on our day’s adventure.
Minowa Sensei and her friend Tomiko picked up and we headed off to Mt Aso for the day. Aso is one of the largest active Volcano’s in Japan. It is constantly emitting steam and gasses which mean’s sometimes it it too dangerous to go near the vrater because the toxic gasses are too thick. Unfortunately this was the case today so after a quick group selfie in the carpark (as you do) we jumped back in the car and headed down the mountain to the Aso Museum. The museum has lot’s information about the Aso region and Volcano’s. The entire area was once a huge mountain range until there was a massive Volcanic eruption causing the ground for 100 miles around to collapse in on itself forming a massive crater which then formed a lake. Over the next few million years the current volcanos formed in the centre of the massive caldera. The valley floor in the middle of the caldera and around the base of the volcanos is now rich farming land which produces some fantastic produce.
After the Museum we went into Aso to visit the Shrine and then found some lunch. As many of you probably know, I am a coeliac and finding food I could eat in Japan was one of my biggest worries but Minowa Sensei has been fantastic, she did some research so she knew what was ok and helped find a place where we could all eat and ordered for me. Lunch was great- it was a little one man show, the Chef cooked, took orders, seated guests, served and cleared away the plates afterwards, and considering how busy the place was, he did it all in exceptional time!
After lunch we were headed off to an Onsen, but not before stopping off for Ice-Cream.. Tomika San loves her Soft cream!
The Kurokawa Onsen was amazing, it is a massive complex (we may or may not have become lost as we went back to the car!) Like a little village of its own full of lots of different Onsen and Ryokan and shops etc. The onsen we went to was like a natural spring with rock pools.. the water coming out of the ground there is so hot that they have a bowl of boiled eggs out the front that are just sitting in the water! Gotta love those volcanoes nearby hey!  We looked in a few shops on our way back to the car and then started back towards Kumamoto. On the way back we stopped off a few times to sample some of the Aso regions produce, Seet potato at a roadside vegetable stall, Corn on the cob at the Aso lookout where you can see the Caldera wall extending for miles around and the central volcano range off in the distance, dried fruits at another fresh produce/ local crafts shop along the way. All in all it was a fantastic day but also very tiring. Bythe time we got back to the dojo we had missed the kids class so wehad a bit of a rest before the adult class.
The adult class was taken by Todd Sensei, who is a canadian living in Japan. He was a wealth of information and gave me heaps of great feedback. I seem to be finding a bit of a theme in my training… breath and relax the top half, focus more on the bottom half. We did lot’s of kihon’s, basic punchng, stepping, kihon dosa and kihon kata etc at speed then had a drink break and came back for our own paced kata time. After we had all finished all the kata we knew we broke down Bassai and looked at it in more detail. I would love to have a session with Todd Sensei focussed solely on the bunkai behind the moves we do in kata.. not just the punching, blocking bunkai we do but the real, traditional purpose behind the moves, like gouging eyes and crushing windpipes and all that fun stuff!
After training it was a shower, food and bed for this little duck although as is usually the cse, I didn’t feel nearly as exhausted after training as I did before. I love how Karate fuels my body. 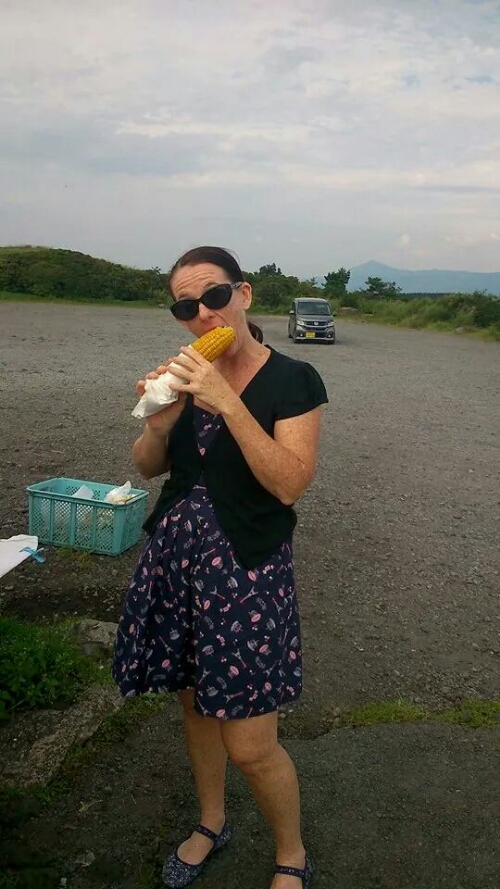 Corn at a roadside lookout 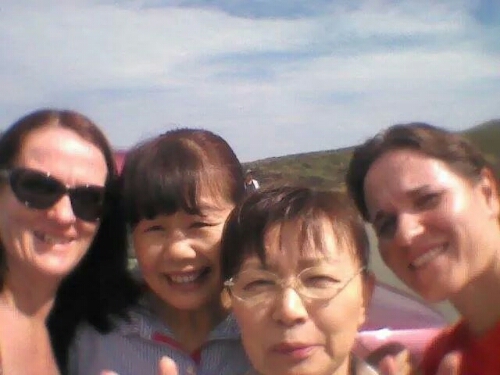 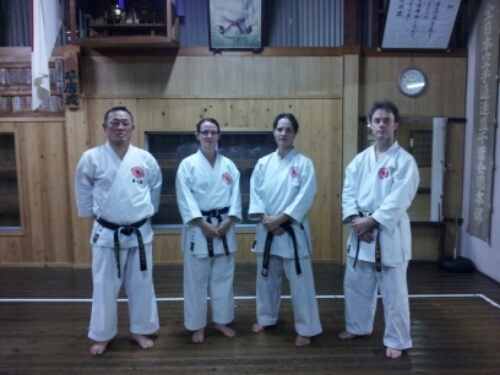