Sorry i haven’t posted in a while, I’ve been super busy.  I have had some full on adventurous days, full of touring and karate, getting ready for the tournament.

I woke up this morning, normally, felt like a normal day didn’t even feel like the big tournament day that we’ve all been working towards for over a year now. I didn’t know what to expect I was just going to go and take whatever comes my way.  I didn’t want to freak myself out by getting nervous.

We finally reached our destinations and walked into the gymnasium.  There were so many people from all around the world.  Many I had already met as i’ve been here for three weeks training with some of them. There were so was many friendly faces.  I had some conversations and a few laughs before entering. Everything was set up, all the matts, flags everywhere from every dojo, people practising, laughing, talking. It was a lot to take in but it actually felt amazing, just to be there surrounded by all those people.

After a little bit we were all lining up in our dojo’s team jackets on to get ready to be shown off to the judges, support teams and to each other for the opening ceremony.  Walking in as a team with the uplifting music in the background and people clapping, the feeling it gives you is un-explainable.  If you could feel like that all the time, wow, what people could achieve, no more grumpy faces walking around. It was very uplifting and got you excited for the day ahead of you.

My first division was straight up, team kata, guess what we came first! You know out of two teams, but still was better then second. I then had my individual kata division to prepare for which wasn’t until 2:30pm, which became like 3:30 or 4:00 as we were quite behind on scheduled. Until then i turned into the camera girl, for Sam, which was good cause it distracted me for what was coming up.

I did however notice that my Kumite wasn’t until tomorrow.  I was in a division of 5 girls including me,  I was told there would only be 4 of us in tomorrow final round! Does that mean we fight today and eliminate one person or what?  It took me forever to figure it out, no one could really help me, they were confused as well. But I got told to just follow the timetable so that what’s I did. Was very stressful though as I wasn’t in the right mind frame to just be randomly called up for a fight. That takes preparations. Anyways I just kept calm and tried not to think of it.

During the day I met so many new people handing out my little koala key chains to people and chatting.  I got so many people always coming up and just giving me lollies and trinkets and things they have made, was a great atmosphere.

Time for my individual kata, it was busy.  We has Sami to watch, then Sensei Sandra and Mum.  Then Keanu’s, Sam’s, Sensei Martin’s and Anthony’s division was up.  Then mine after all that. As a result, I didn’t actually get much time for much practise, as i was so busy watching everyone, seeing how they went and filming people’s kata. I literally put down Sam’s phone and passed him as I was going in for my division, it was quite a hectic time of the day. Only 5 girls in my division, I was 2nd up.  Two of them were 16, one was 18, plus Tiffany and I. I was up second I didn’t watch the girl before me, I didn’t want to freak myself out. Still not nervous though, so weird. Whoop there’s that familiar name, that’s me, hopefully I’m ready to go. As I walk out onto the mats it still feels like im just in the dojo practising, I’m thinking this is great. I said the name of the kata, started the kata than bam, it hit, my about my 3rd technique in.  I don’t think it was nerves, I think it was just the realisation that I’m here.  Finally, what I’ve been training for, it’s happening, I’ve hardly had a chance to take it all in, wait what, the scores are being called out.  I must be done. I found myself breathing a bit to heavily, waiting to bow and walk off the mats. Wow, I was thinking that was good, still hardly knowing what score I got, if it was good or bad. When the next three girls went, we all stood up the judges came over and called out first, second and third. My name wasn’t there maybe I didn’t go so well. Oh well i actually wasn’t too fussed over it surprisingly.  I think i am just happy to be here in Japan competing in the Soke Cup.  If I place, great, but I don’t think I am personally expecting anything great to happen for me.

After that though i didnt have anything else on until tomorrow so was just time to relax and support others. I was glad that my kumite wasn’t today, for me i need more time to get my head in the game and is hard when im thinking of both kata and kumite, so tomorrow i can just focus completely on kumite nothing else. This is only a short blog mainly just telling you the first part of the tournament weekend. Tomorrow i will talk about the Kumite i experienced and watched today and what i experienced personally with my Kumite divisions tomorrow. I am very much looking forward to it though, watching the kumite today.  I’ll tell you about tomorrow, really got me excited for my fights and a little  scared, as there was a lot of injuries. 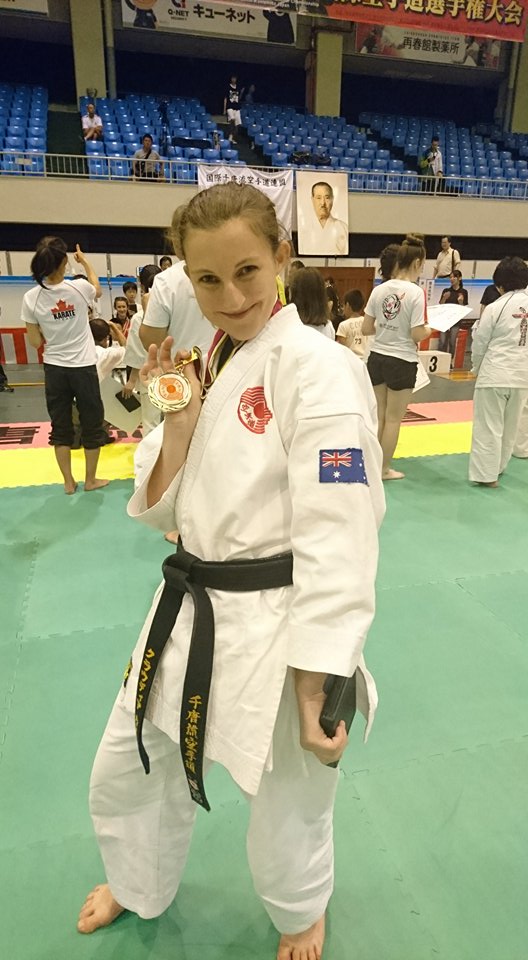 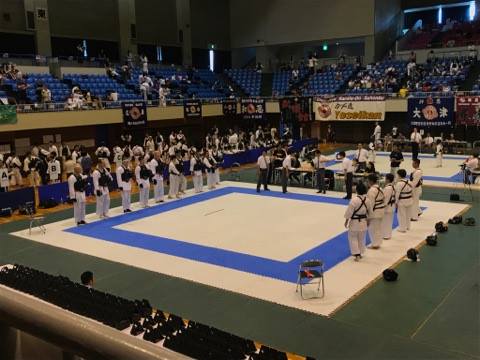