I woke up feeling good and rested this morning ready for our first training session. It was the usual Sohonbu morning training, lots of basics and stepping in line followed by some kata and bo. I think Soke Sensei was being gentle with us as it wasn’t as fast paced as I remember from previous visits. Although I was still going as fast as I could this morning, I didn’t feel as left behind as usual!
It’s always interesting doing long seiza in the morning when I haven’t done it for awhile, observing how my mind wanders and how hard it is to find a quiet peaceful state of mind. The first 15 minutes or so were ok but the last 10 minutes I found it hard to draw my mind away from the discomfit of sitting in seiza on the wooden floor. I just tried to continually bring my focus back to my breathing and posture. Thankfully I was given the advice at a training camp early on to just not move. The more you move the more painful it is! I also remember hearing a senior talking to someone once saying ‘Don’t think those black belts in the front line aren’t feeling it, they are in pain too, they just have more self control.’ Mastery of the self, isn’t that the core of what Karate Do is about? So I will continue to work on émpty Mind’ during morning sessions. Hopefully this will improve over the next two weeks.
After morning training is always Souji (cleaning). Traditionally this is done with wet rags in each hand and running back and forth along the floor washing it all by hand. It’s a great workout!
After Souji we did some washing and had some breakfast before heading in to town on the train and tram. Sandra has been fantastic with her Japanese and helping play tourguide. It has made it much easier for me to settle in. We wandered around in town and visited the shopping village next to Kumamoto castle where we looked at some gift shops and food shops. We watched some Japanese men putting on a demonstration/show in samurai outfits. It was a shame we couldn’t follow what they were saying because it looked pretty funny! After that we found some food and headed back to the Sohonbu for an afternoon rest. While the heat here at the moment isn’t anything we don’t experience at home, it is a bit hotter than the Sunshine Coast at the moment so we are being careful not to get too fatigued and dehydrated.. this is a training trip after all so must keep some energy for the evening!
At 5 O’ Clock we headed down to the dojo for the kids class with Naoyuki Sensei, it was just a small one today, we started with basics and Kata practice then Sandra was asked by Naoyuki Sensei to show us what we do in our dojo in the kids classes so we did some more basics interspersed with races across the dojo and some core strength and conditioning exercises Sandra Sensei style! After the Kids class there was more Souji and a rest before the adult class. For this class we focused alot on kicking and staying the same height throughout the kick. we did some speed kicking and then we moved on to power and generating the power from our hips, we did an interesting exercise for Mawashi Geri to help generate power…. that’s one I will be sharing at home because I need to practice it… alot! 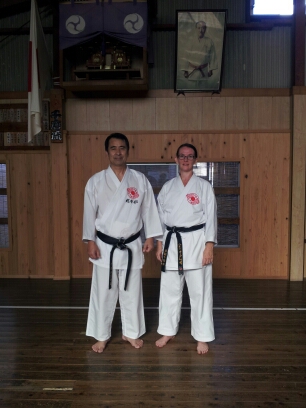 With Soke Sensei after morning training 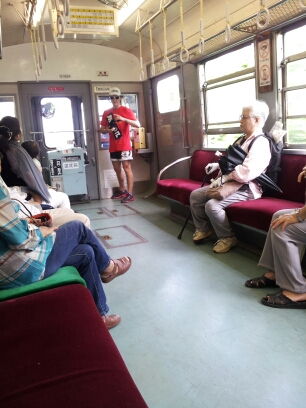 Sensei Sandra doing some tanden training on the train 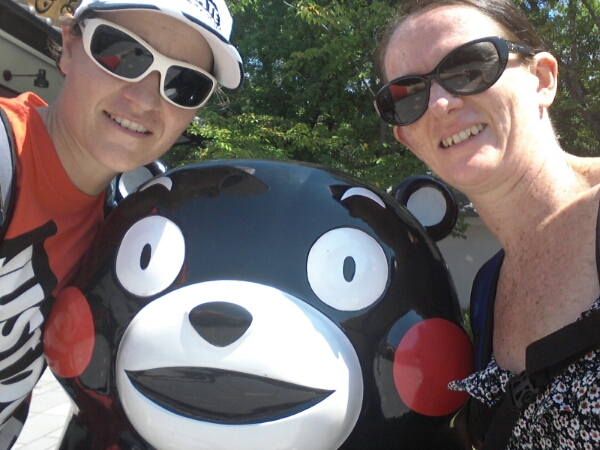 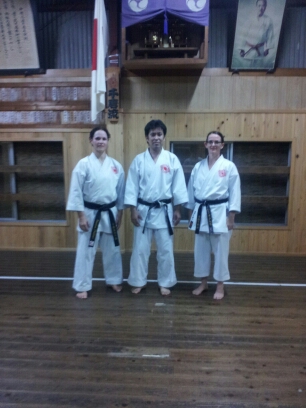 Sandra and I with Naoyuki Sensei