Today was a public holiday here in Japan, a day set aside to honour the elderly, so there was no morning training. I woke up and spent some time going over my training notes from the past week and going over some stuff in our room, I was feeling very demoralised and frustrated this morning, there are so many things I want to be able to do and I just don’t know where to start, concepts that I am starting to understand on an intelectual level but my body is still years behind.  I came to the conclusion in my notes this morning that there are some fundamental things missing and until I get them sorted nothing much else will fall into place but I didn’t even know where to start when it comes to training. After Sandra came back up from doing her own training she convinced me to go for a bike ride to the shops with her. Now it should be said that I can’t really ride a bike very well and the thought of it kinda scares the bejeezus out of me. I grew up the youngest of four kids in a house that didn’t have 4 bikes and somehow I just never really learned to ride until i was an adult trying to teach my kids to ride, but It’s not something I am comfortable with, especially in a strange city with very narrow streets, non existant footpaths and lots of people! But today I thought what the hell.. It could be good for a laugh- I needed cheering up, and I needed to clear my head. We didn’t go on the streets, there is a supermarket not far from the dojo and to get there there is a nice wide, not too populated path so it was a really good opportunity to get used to the bike. 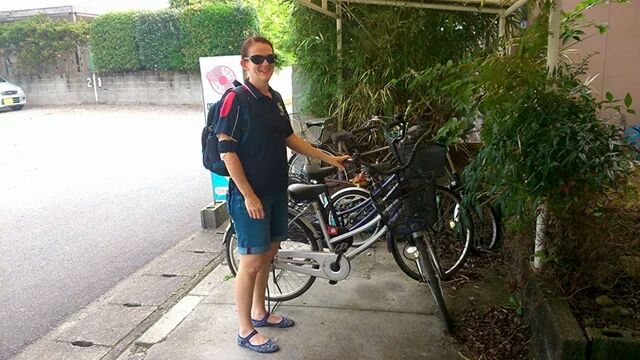 I'm still not enirely convinced this is a good idea.. put that camera away! 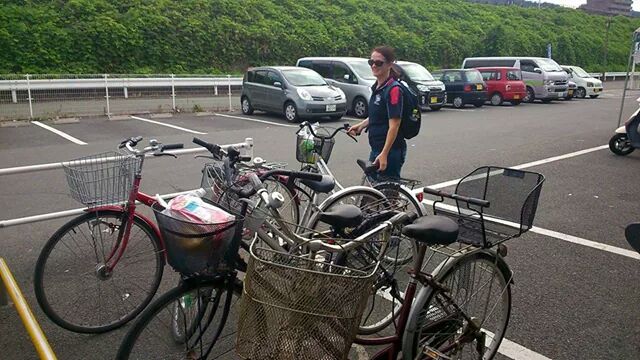 Well I made it all the way there, now just to get back to the dojo!

After we got back and had breakfast and a chat it was time to get ready for the demonstration we were going to today with Tanaka Sensei. Tanaka Sensei’s first student, Shingo, works at an old peoples home, and, because today is a day for honoring the elderly, they had invited him to do a demonstration of Karate. We had arranged earlier what we would be doing for the demonstration so Tanaka Sensei came over to the Sohonbu a bit early to discuss the details with us of timing etc, and to practice some bunkai with Sensei Sandra 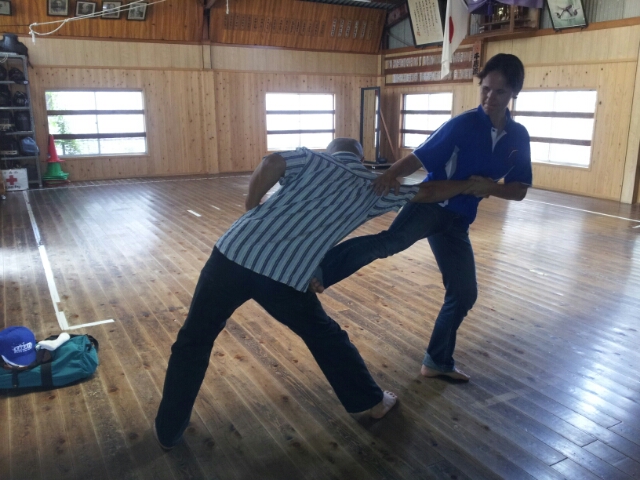 Tanaka Sensei and Sandra Sensei practicing their Bunkai for the demonstration

After a quick practice we headed of to the centre. When we got there they took us up to a room where we could change and bought us tea etc. It was all very organised, we had a room set aside for us to change with a sign on the door . I was surprised at their hospitality, although I shouldn’t be, everyone is always exceedingly hospitable and polite in Japan, but still, it was nice that they bought us chairs and a tray with tea and coffee just while we got changed. While we waited in the room, Toyodome Sensei joined us. I have never met Toyodome Sensei before although we have been facebook friends since Sensei Sandra and Jodie came last year. It was great to finally meet him, he is a very funny friendly gentleman. While we were waiting we also met Shingo, Tanaka Sensei’s student who worked at the centre. He was also really lovely and took us down to where the demonstration was to take place. There were some other demonstrations planned and we were lucky enough to see some traditional Japanese dancing before it was our turn. 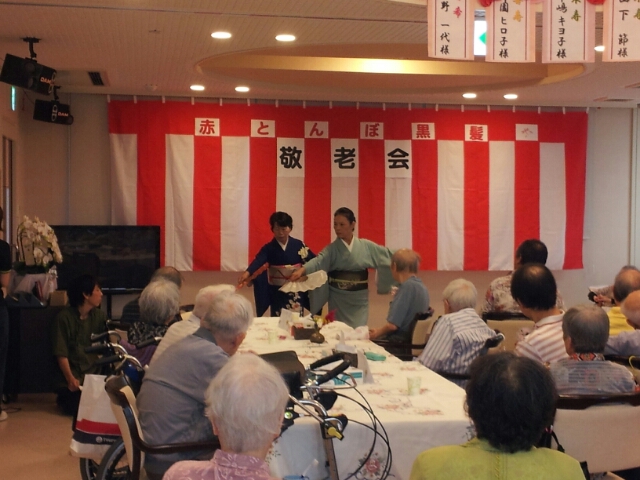 Tanaka Sensei had gone through the plan with us at the dojo, he was going to give a short talk introducing us and karate and then he was going to take the residents through a lesson in correct fist, basic punch, and kiai, then we would do our Kata and bunkai and last Shingo would break through some roof tiles. I was so impressed with Tanaka sensei’s presentation and the way he got the residents involved, the looks on some faces when he told them they were going to kiai! 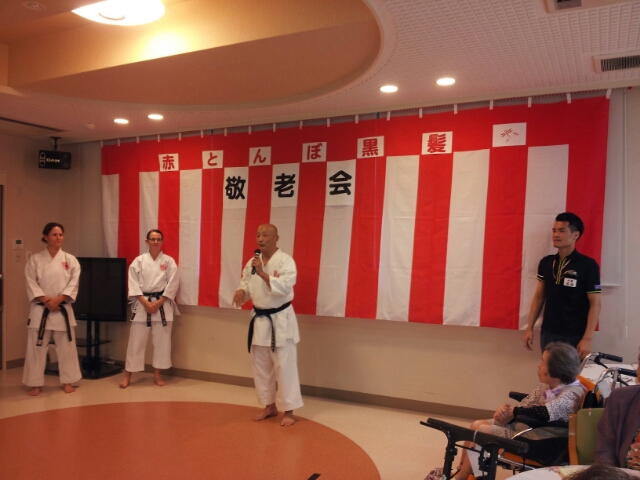 Tanaka Sensei introducing us, Shingo is in the black t shirt on the right. Unfortunately this is where my phone died so there are no more photo's of today

From the senior centre Tanaka Sensei and Toyodome sensei decided to take us to Musashi park, where it is said Musashi’s tomb is located. Tanaka Sensei explained that there is debate about this and no one really knows where his body is buried but thee is a statue and a shrine built here to him. After a wander through the park we went to Musashi Udon, a noodle restaurant next to the park and had some dinner.
This is where we said our goodbye’s to tanaka Sensei, hopefully we will have another chance to catch up before we leave. From here Toyodome Sensei took us out to Ichimaru Sensei’s dojo for training. This was an interesting experience, when we arrived the kids were doing kumite practice, they are all so fast and very focused. While we were there Toyodome Sensei asked me to perform a couple of Kata for him and gave me some very valuable feedback, Things which tie in very closely to the things I gained from Kugisaki Sensei yesterday but which left me in a bit of a spin. I am now feeling a little bit better about the direction I need to go with my training.. surprise surprise.. it’s not at all what I was thinking!! Thank goodness there are people around who know more than me who can guide me along the way- Sometimes you just need to trust the process!
While we were at Ichimaru Sensei’s dojo Toyodome Sensei also pulled out his Sai. I think Sensei Sandra suggested he give me a demonstration of Sai Kata, but instead I was treated to a brief lesson in Sai, (well… I played around with them for a bit and managed to whack muyself in the head with one!) as well as a demonstration of how Sai can be used in Sochin.
After training Toyodome Sensei bought us back to the dojo and gave Sensei Sandra and I the most beautiful treasured gift’s. I really am overwhelemd every day by the beautiful people here.
I really wish I had some photo’s to show you of the afternoon but unfortunately my phone died and I can’t get photo’s off my camera until I get home. I’m sure Sensei Sandra will post some though so if you are interested head over to her facebook page or Sunshine Coast Karate facebook or webpage.