Well what an eventful day it has been. We had the morning off training this morning so were able to have a more relaxed start to the day. I did some washing… we are still having trouble understanding the controls on the washing machine but everything comes out clean so we must be doing something right! and had breakfast before heading in to town again to look around for some gifts. I decided to walk in because it was a lovely morning and still not too hot. On the way I met a lovely Japanese man who saw me walking along with my pale skin and freckles and somehow knew I wasn’t local. He greeted me with a huge cheery “Good Morning!’. We spoke for a little while as he practiced his English about how long it takes to get to Japan from Australia on a plane and what the weather is like at home. He asked me if I spoke Japanese and I replied that I was here for a Karate training trip and I could speak ‘ Karate japanese’! Mae Geri, Yoko Geri, tski… he laughed at that! We said our goodbyes and I continued on my way. I had a few grocery items to pick up and I wanted to find a 100 Yen shop today, I did that and grabbed a few things but before I knew it it was time to head back to the dojo as we had arranged with Minowa Sensei to go to a ‘stretching’ class with her at 12.30. I decided to catch the tram and train back which went very smoothly and was essentially uneventful. The train was a cool green frog train- alot of the public transport here is painted with cute characters and they change depending of the festivals and things that might be happening at the time. I got back and had some lunch and then we headed off with Minowa Sensei. On the way we stopped to pick up a friend, Tomoko. Tomoko turned out to be a hilariously funny lady and we spent the rest of the afternoon laughing.
Stretching class started out pretty straight forward, lots of range of motion and stretching as you would expect, then we started to play some fun games that were all about co-ordinating the two sides of your body doing different things (like the old rub your tummy and pat your head thing). This soon had me lying on the floor in tears of laughter! Next we separated into two grups and randomly linked hands in the middle and then had to try to untangle our group.. great teamwork exercise! After a quick break it was time for dancing…. wait… what??? Yes we heard right… dancing! Talk about getting out of your comfort zone! But the ladies there were all so lovely and we were having such a great time so why not.. by the end of the session we were comletely on top of it… Isn’t that right Sandra??! By the end of the class we were eager to come back for more next week. Note to self… must buy toe socks for next week.
On the way home we stopped of for some ice-creams, we had earned them after all that dancing, and made plans to meet tomorrow for a trip to Mt Aso. I’m really looking forward to this as I have been twice but never got to see the actual crater for various reasons. Fingers crossed tomorrow it wont be too gassy for tourists. A little known fact about me is that before I had kids I was studying geology at Uni, largely because of my fascination with Volcanos and tectonic activity.
Training tonight was lots of fun Goshi Sensei and Naoyuki Sensei both came with all of their families, there were lot’s of kids and lots of black belts. We all did some training together and played a game together and then broke up into smaller groups. i was instructing a couple of young orange belt boys. Sensei asked me to teach them in english so we had a bit of fun with that!
After training we played around and chatted for awhile then said our goodbyes. It’s getting pretty late now and we have a big day and early start tomorrow so I had best be off to bed 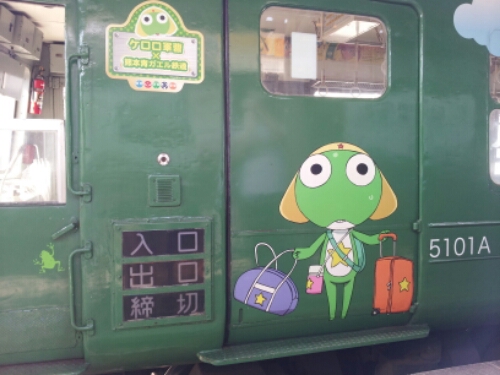 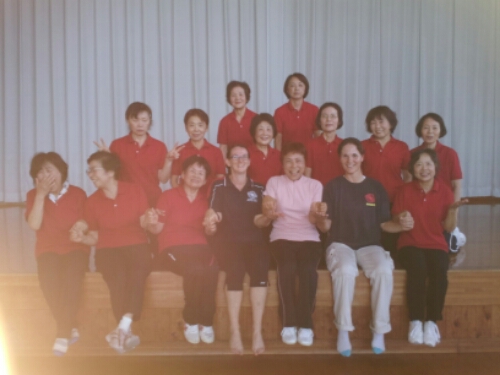 The wonderful women in our stretching/dance class 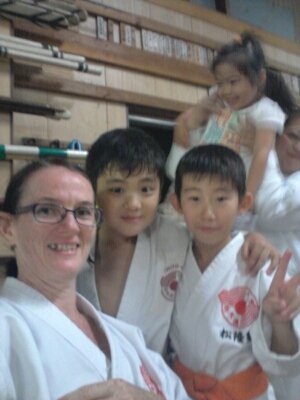 Sandra and I with the evening class