It was a very exciting and interesting morning session today, our last one with Soke Sensei. Part of the Canadian team joined us for this mornings session, there was a lot of people in the dojo! Maybe 26 altogether. Lets just say there wasn’t much room in the sohonbu after we all lined up. We went through the longest seiza I’ve had since I’ve been here, probably about 30 minutes, we’ve been doing about 20 or 25 minutes. Then Sensei Sandra led us through a 20 minute warm up and stretch. Then Soke sensei had us all introduce ourselves, by the end of that it was 7:30 am so we had about 30 minutes worth of training left.

We did some basic stepping which was like 3 steps forward and back.  We then did some partner work open hand blocking and punching which got into high speed, continuously kept swapping, in uchihachi-dachi and shiko-dachi.  After that we did a balance test game, same as we do it at home in all the seven standing stances heisoku-dachi to sonkyo in each stance we would try push each over, who ever lost got to be the special person to do 10 push ups. Guess what, I lost every time except for the last time, yay. So I ended up doing 60 push ups on the wooden floor on my knuckles. That was so much fun!!! Ha ha ha not, it hurt.

By the end of that it was the end of class it was a lot of fun, we then had about an hour of taking tooooooooooo many photos groups photos single photos, lots of photos! It was great to meet everyone they were all so nice. Todd Sensei then took us through the tour of the Dojo and what all the master and high Sensei’s written on planks of wood that hung on the walls of the dojo. Sami caught me giving her a weirdo look, she just had to take a close up.  Meanie…………….. 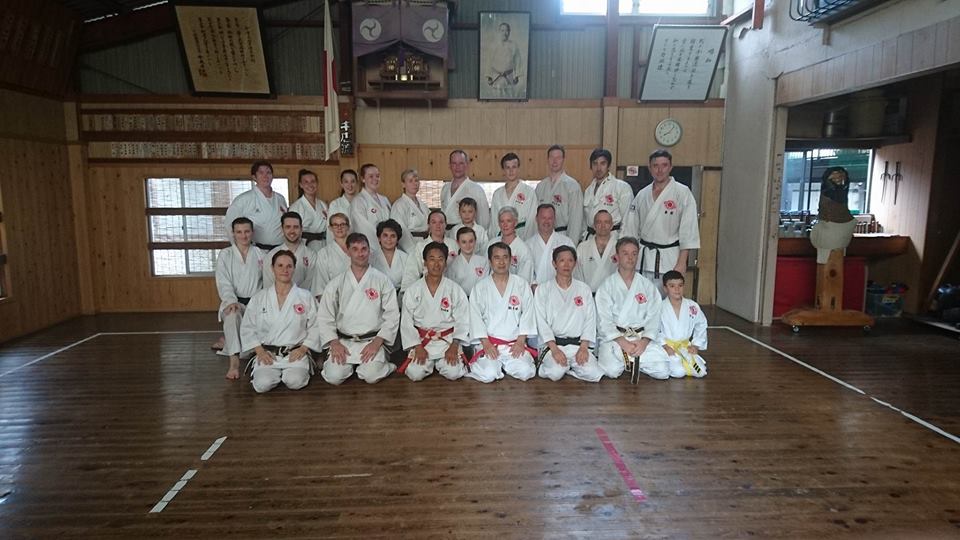 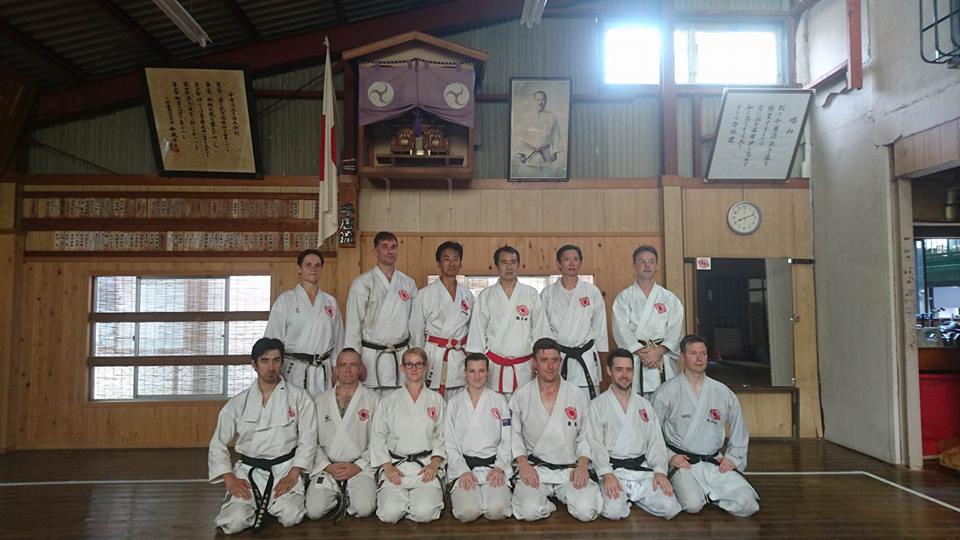 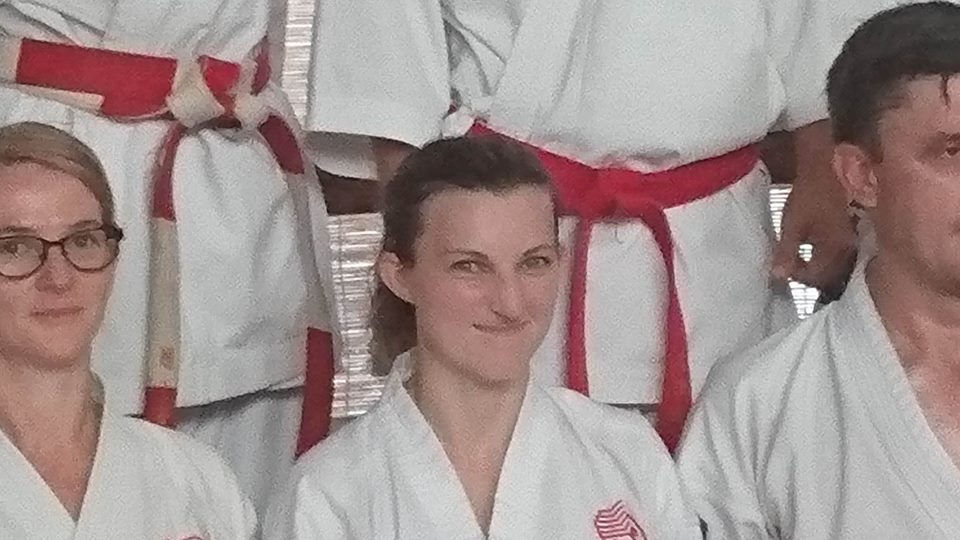 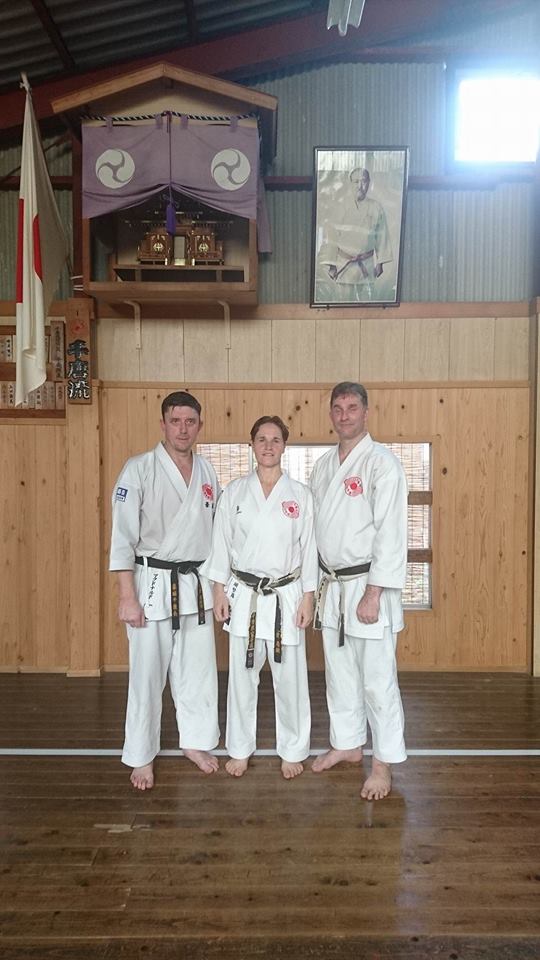 We found out a lot of amazing information about Chito-Ryu.  For example, did you know that Hank Slemansky Sensei trained here in Kumamoto? He then moved to America after his military career was up, and one of his students was actually Elvis Presley.  So Elvis actually studied the same style of karate that we do.  I found that absolutely fascinating, as I love Elvis and when I found out that he actually got a black belt in karate that made me look forward and be proud of working towards mine. But to find out that i am actually doing the same style as him is mind blowing for me. If you look back in some of his albums you see Elvis wearing a silver Chito Ryu crest pin on one of his suits. 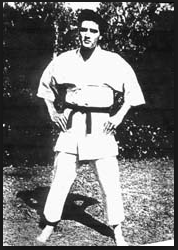 We also found out that O’Sensei is the only person in Chito Ryu that has received a gold belt, which means that all head Sensei of each Dojo in the world came together and discussed who they thought has made the biggest contribution to Chito-Ryu karate and the all agreed that O’Sensei deserved that honour. He is the only one that can wear the gold Chito Ryu crest pin.

We then got shown some of the weapons and we got to try out the metal bo, which is made with two bos.  The objective is to make the inner bo vibrate while using it. 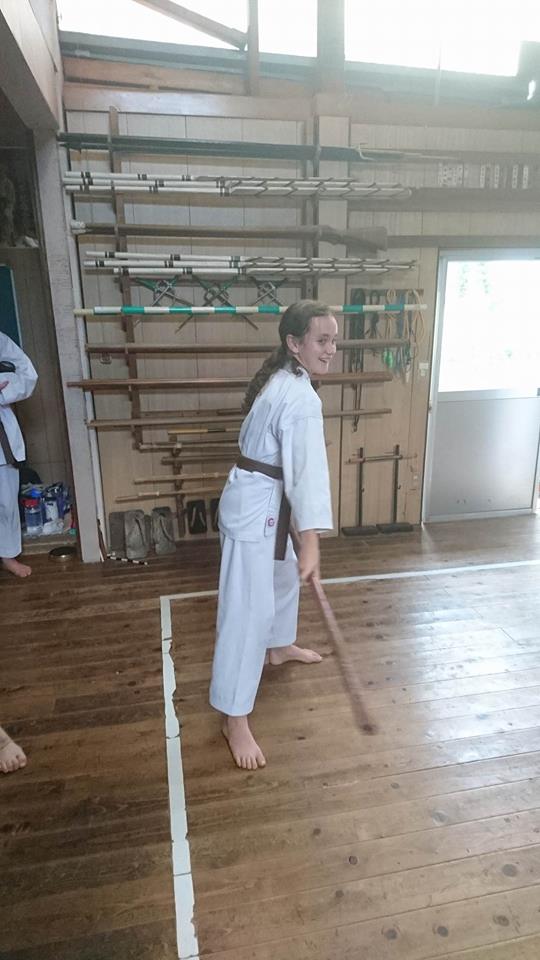 Sami also ran into the wall while doing souji trying to beat Sam to the end i don’t know who won, Sami definitely hit the wall first.