Tuesday, 6:30 we headed to the park for morning training, has Sensei Martin watching via video chat, just doing some performance kata and kumite training.  Sami wasn’t feeling so well, so was just Sam and I for Kumite which i found very good as Sam always pushes me to work harder and go faster. Also it was Helen’s first park training. She only did the kata part of the session, then turned into a photographer for the next part.

Came home, had showers, and ate.  Then, we pretty much Jump into the next session Kobodu. Mark Snow Sensei and Adam McDonald Sensei from the Blue Mountains joined us for the class.  They in Japan the day before, was a good session, but a bit tight for space with 7 people holding bo.  But we got through the class without injuries. Just working on shishi no sho demonstration and basics 1-15.

At 5:30pm we were going to get picked up by Miyazaki Sensei and go to his Dojo which was about a 40 minute drive through the city. It was a very different class, at the start we pushed back our lines to the back of the class. I thought we were going to be jogging laps of the dojo, but we literally just walked across and back.  It was so weird.  We then walked backwards, then we skipped, not skipping with high knees, we skipped as though we were little girls with a lollie pops.  It was a very different warm up than I’ve seen over here so far.

We then did some basic stepping but with out hands on our hips instead of behind our bodies which again didn’t feel quite right. We then split into groups and had the opportunity to teach again.  I was scared of that, however I only had two yellow belts and was working on Saisan Kata which was actually quite easy, ust going through the kata with them and fixing up some pull backs and posture.

Break time, the kids put on their kumite gear ready to get physical, Sami and i had the little white belts mainly just holding bags while they attacked, was very cute to watch. To finish off the session we got into some matches, Sam and I were judges with the flags, and Sensei Sandra was the head referee.  It was interesting to see them fight.  There were three matches, the last one was probably the most entertaining.  The girl was very quick and did not hold back with her attacks.  It was different to see in such a young girl.

After the session we had a bit of social time, setting up some table and chairs all the kids parents and teachers sat down for some nibbles and some time to talk and get to know each other. We all had to stand up and say some stuff about our self’s, they all tried talking in English and well.  Sandra, Sam and I spoke in Japanese.

It was a very nice atmosphere had a lot of fun talking and eating. I sat next to Inko (I think that was her name).  She kinda of spoke some English so she was helping me through it all, thank god. They also made some little gift bags up for us, and one of the student’s grandmother’s made us all an owl out of paper as you will see in my photos, hand made, that’s crazy it looks store bought. 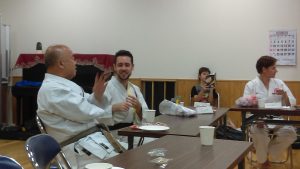 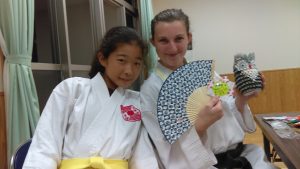 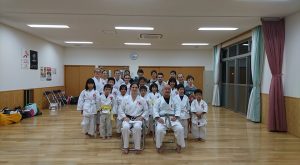 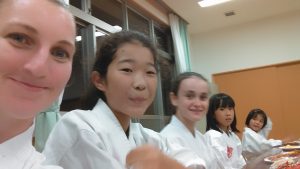 Today after this mornings session, I’m gonna take the group up to the golf range now that I know where I’m actually going and hopefully go see the castle.  Apparently its open to public now.  We still cant go in the actual castle but get to walk around the grounds will be a good day hopefully.