Tuesday- started out with morning training in the park gi pants and t-shirt. Pretty much just preparations for Soke cup with kata and kumite practise and performances, was quite hot and by the end of the hour and a half training, but it was a good atmosphere to train, with a nice breeze every now and then. 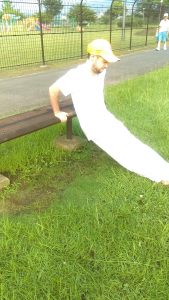 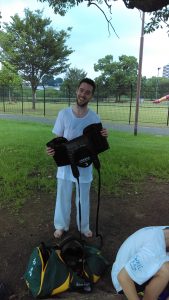 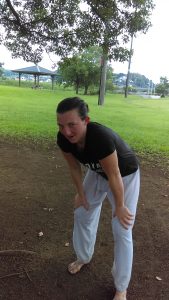 We then had a two hour 10:00 -12:00 Kobudo training with Higuchi Sensia, where Sam and I learnt shushi no sho bo kata mainly just remembering the sequence not so much worrying about to much detail at that stage. I found that very helpful and enjoyable just to have time to go through it as many times as we wanted. I am now very confident with shushi no sho, so I can now start looking at detail of my stances, targets ect.

During the day Sensie Sandra took us out to the city centre mostly to show us where shops and things we can go see are, we enjoyed some really yummy crepes that Sam spotted. Then Sensai Sandra took the kids home as Sam and I kept exploring around all the shops. At about 5:50pm Sam and I received a message from Sensai Sandra saying that we are getting picked up from the Sohonbu in an hour to go train in Masuda Sensia’s Dojo. We went to the bus stop to try and get back in time to have showers and eat, when our bus did not arrive, we then had to run!!!! 1.6km to the train station to get back in time, we just made it in time to have a 30 second shower each, jump in the car and go. We feel sorry for the people who has to clean the train as we left quite a bit of a sweat pool for them. 😛 As you could guess after such a big day Sam and I were both very worn out and exhausted, and had another training session ahead of us.

We walk into Mesuda Sensai’s Dojo wearing gi pants a t-shirt and a belt which felt bazar without a gi jacket on. We got introduced luckily, we had a lady who could speak English to help us understand what was going on during the class. We followed along with some basic’s and a few junior kata, we then got to relax and watch the class perform some higher-level kata’s for us, Sam and I then performed Bassai, and Sami and Steven demonstrated shihohai. After that Sensia Sandra, Sam and I had a surprise attack of teaching small groups of students each, which was quite scary as we do not speak their language and they have small differences of technique to us. Such as their blocking is to the side of their body not the centre, small details like that, that their Sensei teaches them. I was put in charge of teaching four young green belt girls. Which one of them spoke a tiny bit of English, but I had to do most of my feedback and comments by demonstrating to them. It was quite difficult as most of the time I just got a blank stare back in my direction and did not really know how to be clear to them to what I was trying to say.

At about 8:30pm adult class started which consisted mostly of black belts only one was a green belt of a class of about elevenish students. They said it would finish at 9:45pm, so late. So Sensei Sandra took the kids home and Sam and I stayed back to train which was a bit scary as Sandra know more Japanese then we do and she was helping us out a lot with understanding instructions and having conversations. It was a great adult session mainly just went through senior kata’s first slowly than normal speed with intensity and intent. Sam got taught how to do rohai dai, and I got some more touch ups on sochin. Which I found very helpful, but the first four directions in that kata they do extremely fast was actually hard to keep up. Another funny thing I found was that a few of the men in that class was getting effected by the heat more than Sam and I were.  I found that amusing as they should be use to training in those conditions. We finished the class with a kumite round between Sam and a boy about 20 that was going to Soke cup for kumite, it was very interesting to watch him fight as he got very low to the ground, and had a good amount of speed. 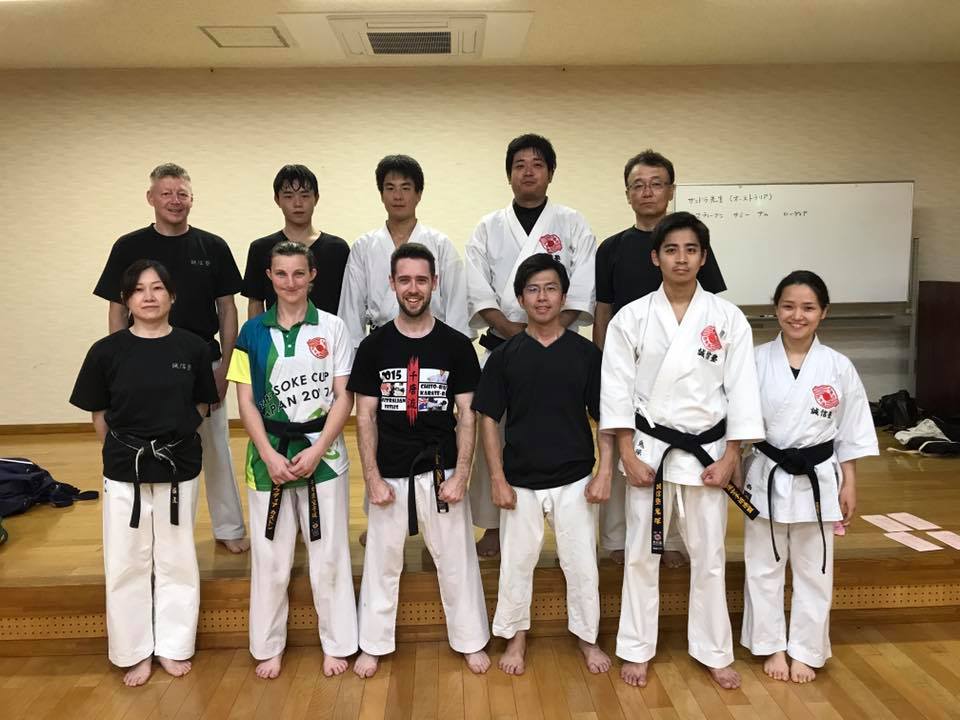 By the end of class I was ready to pass out for a good 9 hours, but by the time we got home it was just past 10:00pm, we had a shower got some food and got into bed by 11:00pm and had an early morning training with Soke Sensei to look forward to.

Such a big day