I can’t believe our time here is almost done, we  only have a few more days to go! This morning was a quiet one which I was glad of as i was feeling very tired today after several late nights of visiting and writing blogs etc. When I woke up Sandra was already down in the dojo training. I reviewed my notes from the night before in our room and went over some of the things that Toyodome Sensei was helping me with last night. Unfortunately doing lots of the opening and closing moves of Sochin has really aggravated my tennis elbow so I didn’t do too much this morning but I think I may have found something that will make a big difference. It’s funny how you can hear something over and over and then one day someone just says it a different way and it’s like Óoooh… so that’s what you’ve all been trying to say!’
I did some washing and helped Sensei Sandra finish of with some cleaning and then had a bit of a rest before Minowa Sensei took us out again to her stretching class. These women are so inspiring, I feel so privileged to have been able to share that time with them. The class is for older women, I believe Minowa Sensei said the youngest is 58, and yet they are so lively and energetic and fun, and thier bodies so young. The class is really well designed, beginning with stretches and body mobilisation exercises, then some games to exercise the brain and co-ordination as well as teamwork (and a great laugh). After that they have a quick break and are into the dancing. This week Sensei Sandra and I just watched the dancing part as they are getting ready for a performance soon at a festival so they were working on spacing and placement of everyone. It was great to watch. One the way home we stopped for ice cream.. this has become something of a ritual when we are with Minowa Sensei and Tomika San! After we got home we had a bit more rest time before the evening family class.
I went in to the dojo a little bit early on my own and spent another 5 minutes on what I was working on this morning, I figure little bits at a time all add’s up.
Class tonight was lots of fun, we started by warming up with some running races and skipping etc. After the warm up we got the mats out and did some rolling. First off we just did somersaults, then backwards rolling, and then normal ukemi. After a few goes through Naoyuki Sensei got out a bar for us to jump over before we rolled and gradually started to increase the height. 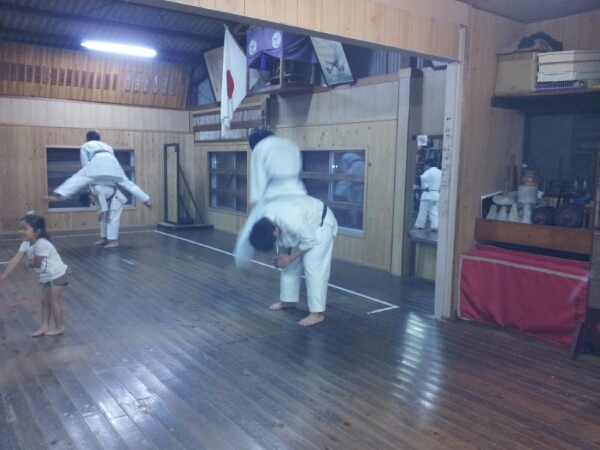 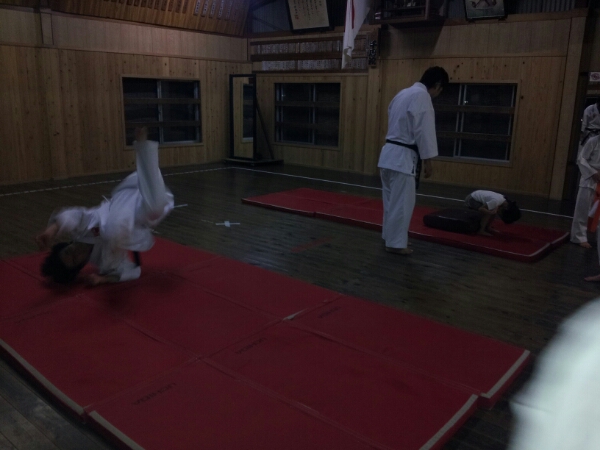 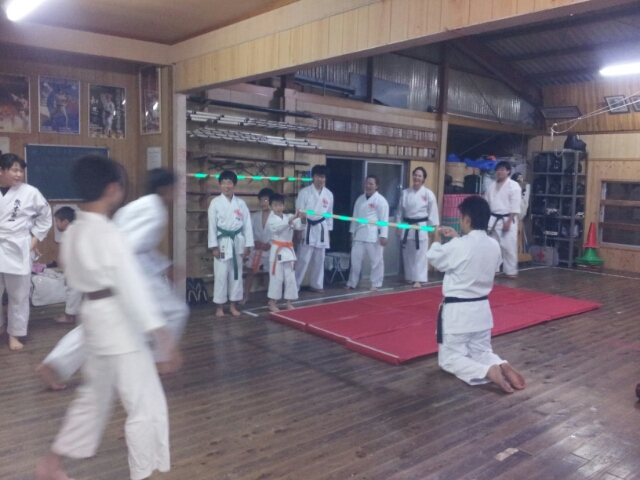 How high can you go! 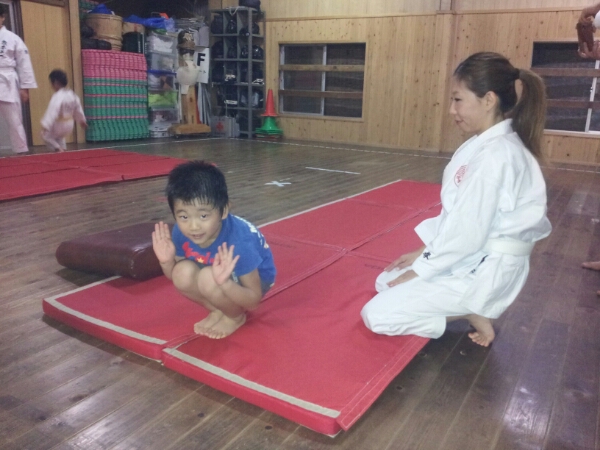 When we had finished the rolling and packed the mats away we lined up for some Kihon Dosa Ni and Kihon Dosa San and then some basic blocking. From there we broke up into groups and did some bunkai. The Black belts were doing Kihon Dosa Yon Bunkai together in a rotation. 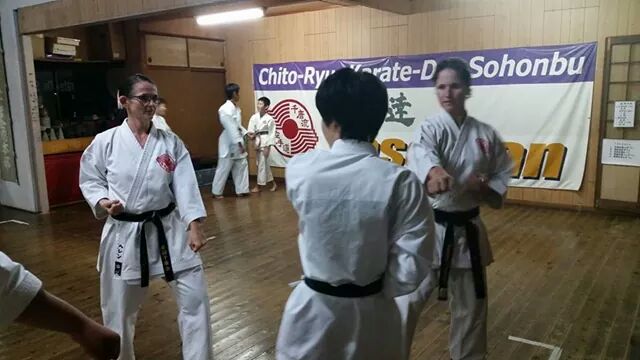 Lastly we did some Mawashi Geri with the kick pads before finishing up the class
When class finished it was time for Souji again.. the Tuesday night class is the biggest and Souji could easily be done in one pass each but there is so much fun to be had in racing each other that the floor ends up spotless by the end! 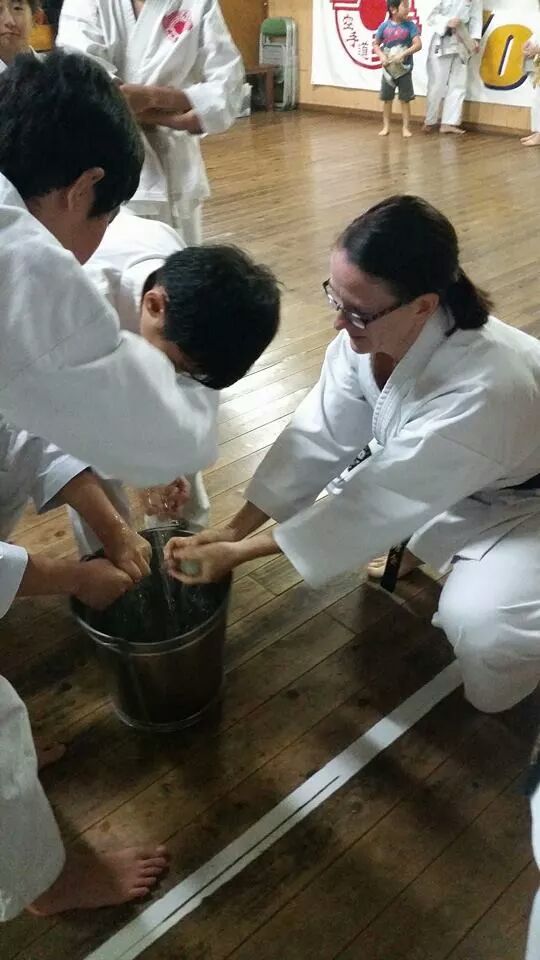 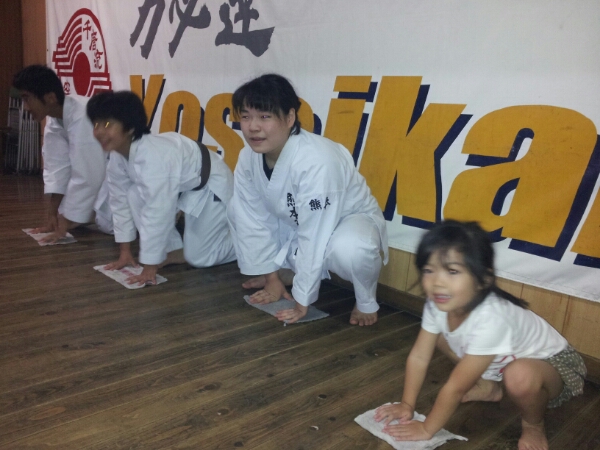 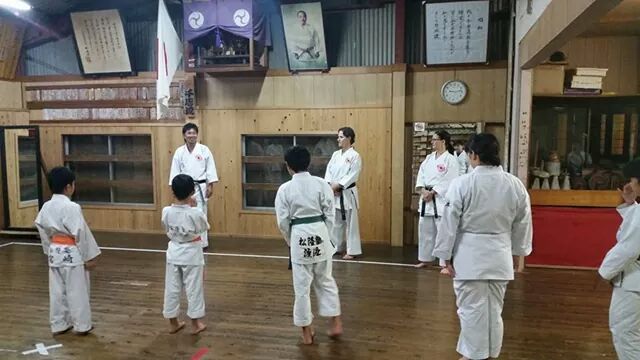 Saying Thank You and goodbye at the end of the class